How a Glendale Electric Motor Works

Everyone in Glendale has probably played with magnets at some point while growing up. You learned that each magnet has two ends. Scientifically they are known as the north pole and the south pole. Their names refer to the fact that when the magnet is suspended freely, the north pole will always point towards the Earth’s magnetic North Pole. When playing with magnets it’s easy to see that the like ends of two magnets repel each other while the opposite ends attract each other. 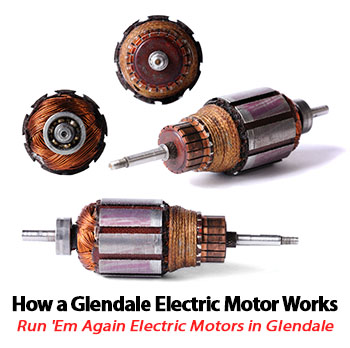 The basic parts of an electric motor consist of the rotor, the stator, and the windings. The rotor contains conductors to carry currents that when acted upon by the magnetic field of the stator creates enough force to turn the axle.

The stator is the stationary part of the electromagnet.

The windings are wires wrapped around a core forming magnetic poles when a current is passed through.

Today, although we use electric motors in practically every household appliance, from fans to air conditioners to pool pumps, most Glendale residents are inexperienced at electric motor repair. It often only takes only one day without one of our needed appliances to send us scurrying after a Glendale motor repair specialist.